Before I ever read a page of Jane Austen’s First Love, I was predisposed to enjoy it. I had the pleasure of visiting Jane Austen’s England last year as part of an Ingenious Travel tour with Syrie James and Laurel Ann Nattress. Our small group spent eight days visiting places Austen lived, visited, or mentioned in her novels. I remember Syrie soaking up all the locations and noting details wherever we went, but especially at Steventon, Godmersham Park, and Goodnestone Park. When Syrie’s latest book was released, I was anxious to revisit the places I had seen and discover the world that she had created. 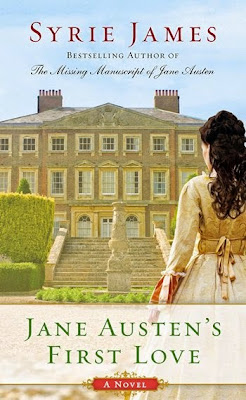 Jane Austen’s First Love begins with Jane and Cassandra in Bath on a “cold morning in late November.” Cassandra is re-reading old letters, prompting Jane to ask, “My letters? Why do you keep those old things? Re-reading them can hardly prove to make lively entertainment of a morning.” Cassandra begs to differ, and within the first pages we have one of James’ signature touches of ironic humor. One of the letters mentions a man on whom Jane says she “once fondly doated” and this phrase triggers memories of the summer of 1791, when Jane met and fell in love with Edward Taylor.

Throughout the narrative, James weaves her research on Austen’s life with a realistic story of an intelligent and lively young woman eager to experience the adventure of an extended trip away from home. Visiting her newly engaged brother and the family of his fiancée Miss Elizabeth Bridges at Goodnestone Park in Kent, Jane is thrilled that she will be allowed to participate in the festivities celebrating the engagement. Her mother has even consented to allow her to attend her first ball, although she is not “out.” But when Jane meets the Bridges’ handsome neighbor Edward Taylor, the prospect of a month in his company causes even greater excitement. Taylor, the wealthy heir to a nearby estate, has just returned from the Continent and is a close friend of the Bridges. He is clever, well-read, and daring. To the fifteen-year-old Jane he seems to be the perfect leading man to star in her personal romantic adventure.

Edward Taylor has ambitions to leave the comfortable life he will inherit in favor of a military career and encourages Jane to strive for greater achievements in her writing. She discusses literature and history with him and playfully muses, “It makes me wonder just how brief a ‘History of England’ can be, before it loses any meaning entirely!” Observing several of the Bridges sisters bickering and complaining about their beaux, she pens The Three Sisters and shares it with Cassandra and Edward Taylor. These are just two of the many literary allusions that serve as whimsical “Easter eggs” for Austen fans as they follow Jane’s adventures in Kent. I found myself hunting for favorite scenes from Austen’s Juvenalia and published novels as the story unfolded.

Unfortunately, Jane also decides to use her creative skills outside the fictional realm. Observing the guests assembled for the engagement party, she becomes convinced that several are paired incorrectly and decides to play matchmaker. When an amateur theatrical production of A Midsummer Night’s Dream is undertaken as a rainy day amusement, Jane uses her power as casting director to manipulate the players according to her design. Romantic misunderstandings ensue and the happiness of the celebration is threatened. Jane does finally manage to untangle the mess she helped create, but has to leave Goodnestone without her happily-ever-after.

Syrie James excels in imagining the voice of a young Jane Austen, full of the exuberance and energy of youth. The voice of the mature woman is equally compelling and poignant. I enjoyed the final pages of the novel where in 1804 Austen writes:

"I have, as of yet, formed no other lasting romantic attachments; nor has Cassandra, who swore to never love again after Tom died. If one of my mother’s and father’s hopes in leaving Steventon and removing to Bath was that we should find husbands, they must be very disappointed. Nevertheless, I count myself fortunate, for I enjoy a loving connection with a sister who is the sun of my life, the keeper of my every thought, hope, joy, and sorrow; I have a large and happy family, and enough nieces and nephews to occupy my time and fill my heart."

Looking back on the summer of 1791, Austen is grateful to Edward Taylor and all the other people she met in Kent:

"I learned so much that summer…about the human mind and heart—about what motivates people to marry—about what really matters when two people are falling in love."

I received a free copy of Jane Austen’s First Love provided by the publisher, Berkley Trade (Penguin Group) © 2014, in exchange for a review. All reviews expressed are my own opinion. 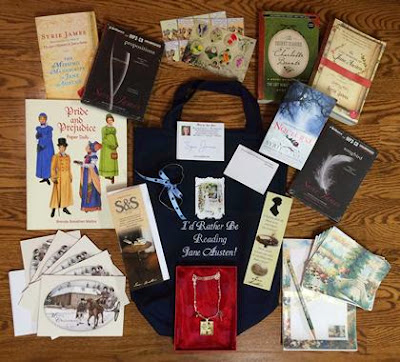 To celebrate the holidays and the release of Jane Austen’s First Love, Syrie James is giving away five prize packages filled with a selection of Jane Austen-inspired gifts and books. (The grand prize giveaway is pictured at right.) The contest is open to everyone, including international residents.

Visit multiple stops along the Jane Austen’s First Love Holiday Blog Tour to increase your chances of winning! The contest closes at 11:59pm PT, December 21, 2014. Five lucky winners will be drawn at random from all of the comments on the tour, and announced on Syrie’s website on December 22, 2014.

To enter the giveaway contest, please leave a comment below.
Posted by tracy@womanonwire.com at 7:30 AM