Flora and Ulysses: The Illuminated Adventures by Kate DiCamillo
My rating: 3 of 5 stars

I loved the squirrel in this story. When he learns that Flora's mother is planning to hit him over the head with a shovel, he thinks to himself:

"It was a sad fact of his existence as a squirrel that there was always someone, somewhere, who wanted him dead. In his short life, Ulysses had been stalked by cats, attacked by raccoons, and shot at with BB guns, slingshots, and a bow and arrow (granted the arrow was made of rubber--but still, it had hurt). He had been shouted at, threatened, and poisoned. He had been flung ears over tail by the stream of water issuing from a garden hose turned to full force. Once at the public picnic grounds, a small girl had tried to beat him to death with her enormous teddy bear. And last fall, a pickup truck had run over his tail. Truthfully, the possibility of getting hit over the head with a shovel didn't seem that alarming."

Out for a ride with Flora and her father, he sniffs the passing smells, including his eternal enemy/victim:

Oh, dogs! Small dogs, large dogs, foolish dogs; the torturing of dogs was the one reliable pleasure of a squirrel's existence.

Flora saves Ulysses from being sucked into a vacuum cleaner and the two become friends and have wacky adventures. Flora prides herself on being a cynic, mainly to protect herself from the pain of her parents' divorce and their bizarre behaviors. "Do not hope, merely observe" is her mantra when she meets Ulysses. On their journey, she cracks open her observational armor and returns to loving and hoping.

The story is full of quirky human characters, but none of them are as endearing as Ulysses.

View all my reviews
Posted by tracy@womanonwire.com at 12:25 PM No comments:

Another week in "The Gifts of Imperfection" e-course begins. 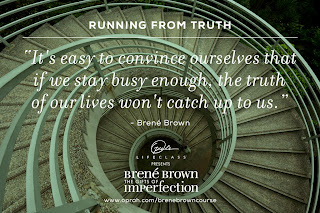 What is the truth of our lives? Do we want to know it? I'm not sure that I do, at least not all of it. Not at this particular moment. Thankfully, this is a process, so I'll peel off a layer at a time. There is such a thing as too much truth at once, in my experience. And it is unlikely that I'm going to publish it here. Just sayin.

But I do think it is important to do. Privately. Quietly.
Posted by tracy@womanonwire.com at 8:57 PM No comments:

The title of this week's lesson in Brene Brown's "The Gifts of Imperfection" e-course is "Cultivating Rest and Play: Letting Go of Exhaustion as a Status Symbol and Productivity as Self-worth." Phew! How's that for a title? I decided to edit it to Resting and Playing. If I say I'm going to cultivate something, I feel a bit pretentious. But I get Dr. Brown's point: you have to practice, repeatedly, letting go of the idea that you must be producing something 24/7 or you are not worthy of existence. 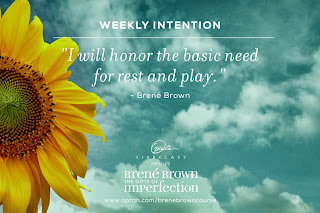 And I know that 5-Hour Energy was created so we don't have to rest, but how long can you cheat yourself of what you really need to stay alive?
Posted by tracy@womanonwire.com at 4:37 PM No comments: