"A man's got to know his limitations." --Dirty Harry Callahan

Much as I'd like to think I could take a stab at a Julie & Julia-type adventure, I'm a firm believer in knowing my limitations. With that said, I'm into a heavy Pioneer Woman love affair this summer, and want to try some of the recipes from her cookbook, The Pioneer Woman Cooks. 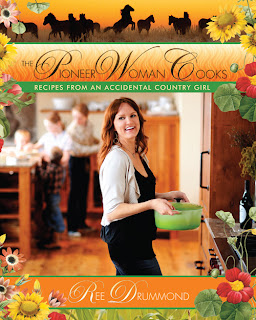 I stumbled across Ree Drummond aka "The Pioneer Woman" after my husband gave me an iPad for our anniversary. He's always busy installing apps on my devices that he thinks I'll like or even someday remember to use. Most of the time, his efforts are wasted. "Why do I need an app that consolidates news and media feeds? I can just read headlines on Yahoo once a month," I groused when he showed me the Flipboard app. Grudgingly, I fired it up and looked at it. News, Tech, Photos...blah, blah, blah. "You can add customized content!" he enthused. Grrrrr. "I'm not adding Oprah to my front page--or whatever you call it."

Then I saw "Pioneer Woman Home and Garden." Hmmm? Oh, what the heck. I added it. Over the next couple of days, after I scanned the depressing News headlines, I'd pop over to see what PW was up to. She was usually cooking something yummy with lots of butter. OK, one point for her. She told funny stories about living on a ranch in Oklahoma. Another point. She had a quirky sense of fun and an easy-going writing style, sort of like she was talking to a sister or a good friend. Hers was a nicely-oiled (or buttered) blogging-machine. As a wannabe blogger who managed to write a handful of entries the previous year, I was impressed.

Apparently, I'm several years behind the curve on PW. She's been blogging since 2006. When I started reading reviews of her books, several people commented negatively on the PW brand. Who knew I had succumbed to another Oprah in the making? I thought about it for a few seconds and then decided, "Who cares?" Pioneer Woman is a breath of fresh air to me. She didn't start out a pioneer woman. She writes daily about "her long transition from spoiled city girl to domestic country wife." I can relate to that even though my journey has been a bit less dramatic, going from spoiled Valley girl to domestic sub-urban wife.

"Lots of people support our decision to homeschool. Some are quietly guarded. Others think we’re mentally ill. I vacillate between all three myself. Believe me, if you’re shaking your head reading this, I understand. If you think I’m a nutjob, I totally get it. If you think my kids will grow up to be weird, you’re probably right. And if you think I’m a freak? You’re right on the money. But you know what? It works for us."

To be honest, I enjoy her attitude about most things.

Now, on to my first recipe: Lasagna. I decided to make this because it is the lasagna of my childhood. We used to have it on Christmas Eve. As Ree says, it is decidedly not authenic Italian cooking. My mother made a lasagna similar to this and it was called "American Lasagna." Early in our marriage, I made this and my husband ribbed me mercilessly. Since then, I've only made it a few times. But today, you know what? It works for me.

Posted by tracy@womanonwire.com at 2:43 PM