May It Be Done

May was a busy month. I procrastinated as long as I could, but I finally had to jump into action. Some of the events included: 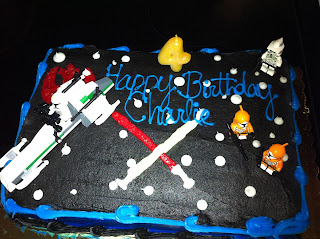 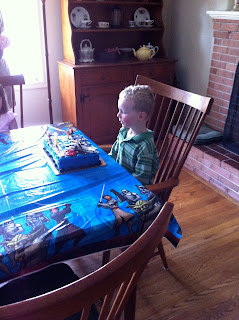 This created some interestingly disgusting faces. 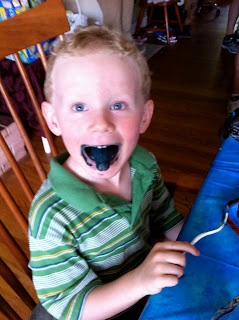 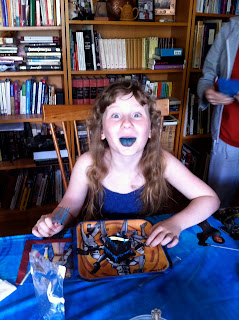 My daughter's ballet recital: Held at a local theater. Both grandmas visit every spring, so that they can attend. Always a little bit of drama, usually surrounding the putting up of hair in a nice ballerina bun. This year's costume was lovely. The music was Water Suite by Handel. 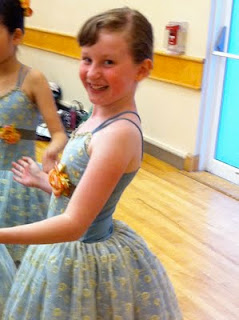 End-of-year celebrations for our homeschool co-op and Bible studies. These both involved picnics which are one of my kids' favorite pastimes. All summer long they ask me if we can have picnic lunches, even when it's 90 degrees in the shade. 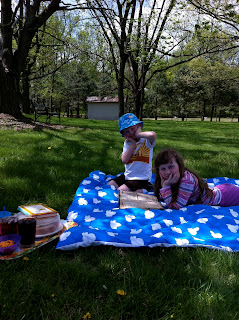 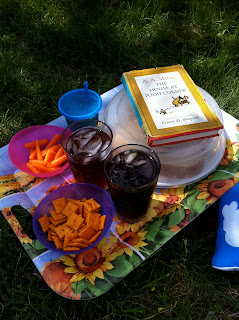 Toward the end of the month, we also hired professionals to replace the shingles on our roof. I didn't have to do anything on that one, except try to stay sane for the twelve hours the crew was hammering and banging overhead. I later realized that I should have planned to go to the beach or playground for the day. Or at least gone outside for a picnic!

Now that we've survived the hectic wrap-up of activities, I'm looking forward to a quieter June. It may not turn out to be much more serene than May, but the act of turning over the calendar page and seeing just a few scribbles is calming.

Summertime and the livin' is easy.

Gift from the Sea

Gift from the Sea by Anne Morrow Lindbergh
My rating: 5 of 5 stars

A great book! Going to send a copy to my mom, because so much in it reminds me of her. A beautiful meditation on the ebb and flow of life.

"One learns to accept the fact that no permanent return is possible to an old form of relationship; and, more deeply still, that there is no holding of a relationship to a single form. This is not tragedy but part of the ever-recurrent miracle of life and growth."

Posted by tracy@womanonwire.com at 4:06 PM No comments:

Built to Last by David Macaulay
My rating: 4 of 5 stars

I wish I'd had this book when I was reading Pillars of the Earth last year! (A picture IS worth a thousand words, especially when they are Ken Follett's.) The text and illustrations provide detailed explanation of medieval building processes. Such an accessible book, as well as interesting and entertaining. Highly recommended to people interested in architecture and history.

Posted by tracy@womanonwire.com at 3:23 PM No comments:

I've got a tote bag full of mail and bills waiting for me inside. A birthday party needs to be planned and shopped for. Dance recital coming up in a few weeks. I should clean the house. I should do a few loads of laundry.

Can you see how a shady spot outside with a glass of iced tea is especially appealing? This delightful weather usually lasts a few short weeks before we are driven indoors by heavy heat and humidity. When I insist on time outdoors, I'm rewarded with sweat-drenched clothes and mosquito bites. I grit my teeth and go outside in the summer, mainly because I dislike spending all my time indoors. Being outside gives me a sense of peacefulness and calm, even when I feel like I'm being slow-roasted. In the summer, the grimy, stinky, sticky price I pay is worth the suffering. It keeps my sanity mostly intact.

Today, however, the only ones suffering are my chores and responsibilities. They are suffering from neglect.

- Posted using BlogPress from my iPad
Posted by tracy@womanonwire.com at 3:40 PM No comments:

Couldn't resist Grumpy Cat propped up on display at the library. That face says it all.

Spoiler alert: Grumpy Cat is really just lonely. This is a pleasant story for young children. It's nice for gently teaching the idea that sometimes there are reasons for behavior that we don't know about. Giving people, and cats, the benefit of the doubt is a topic that comes up frequently in our home. Cat and Kitten are cuddled up together at the end of the story, "They had each found a friend. And Cat was never grumpy again....Well, almost never." The touch of realism in that last phrase keeps the story from becoming too "happily ever after."

- Posted using BlogPress from my iPad
Posted by tracy@womanonwire.com at 10:00 AM No comments:

This is my grandfather's birthday. It strikes me as funny that his birthday is on Cinco De Mayo because he had one of the worst pronunciations of Spanish words that I ever heard. I remember when our family picked him up at LAX for a visit many years ago. He was reading the street signs along the way to the freeway. "Hmmmm, 'Sepple Veeda Boulevard,'" he said. "Sepple Veeda?" I thought to myself. What is that? Then I looked at the street sign up ahead: "Sepulveda Boulevard." Aha.

To be fair, Greene County, PA, did not have a thriving, Spanish-speaking population in my grandfather's day. It doesn't have one now, for that matter. So, he didn't have many opportunities to hear Spanish, except in old Hollywood Westerns, and actually he was more interested in watching sports, anyway. He was a retired high school teacher, football and track coach when I knew him. He hiked, hunted, and played golf well into his eighties. He was tough, but never with me. 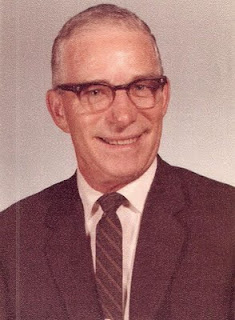 It feels strange calling my grandfather anything but Pappap. When I was a toddler I couldn't say grandpa, so we went with an easier name. The problem came when I hit my teens and had to decide between the old name or a dignified one with more syllables. There is nothing dignified about a baby-talk version of a name. But whose dignity was I really concerned with anyway?

In the end, I stuck with Pappap because that's who he was to me. An energetic, enthusiastic, positive force of nature. He was always learning, always connecting with people. As my mom says of him, "He never met a stranger."

He loved history, poetry and funny songs. A few years before he died, he started an impromptu tradition of singing a few lines from "Big Rock Candy Mountain" whenever I visited. He'd usually sing it to me at the kitchen door, as I was heading out. His favorite stanza was:

He would always laugh and slap his leg and repeat several times, "the jerk who invented work!" which was ironic to me because I knew him as a hard-working, disciplined person, not a scofflaw hobo riding the rails. Yet he seemed to harbor some latent antipathy toward the work-jerks out there. He'd been a young man and poor during the Great Depression. Guess that goes a ways toward explaining his love of Big Rock Candy Mountain, aside from the sheer fun of imagining a visit there. 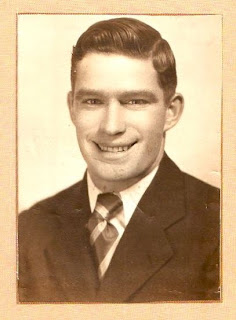 Each year, I remember Pappap with that song. It's fun to sing, but I find that I mix up lines in different stanzas. The lake of stew and of whiskey too, crops up in the oddest places! I have, on occasion, downed a Pabst Blue Ribbon (his favorite) in his honor as well. Some years it's ended up being a microbrew instead, though I suspect Pappap wouldn't have liked such strong-tasting brews very much. Give him his good old PBR!

"And the birds and the bees and the cigarette trees,
Where the lemonade springs, where the bluebird sings,
In the Big Rock Candy Mountains."

- Posted using BlogPress from my iPad
Posted by tracy@womanonwire.com at 7:48 PM 1 comment:

Sarah was aptly named. I never knew, because somehow, I missed reading this book as a child.

The Courage of Sarah Noble by Alice Dalgliesh


I saw this book listed on several homeschooler's reading lists, so thought I'd check it out. I enjoyed the story and the simplicity with which it was told. One review on the dust jacket read, "This is a book unmarred by preachment, piety, or sentimentality--a book without flaw, it seems to me, which must become an American classic." --Christian Science Monitor.

Several reviewers found the treatment of the Indians offensive. I don't find that to be true. The main characters are tolerant and thoughtful. Some of the other characters display judgment and fear, but their attitudes are discussed by Sarah and her father. He assures her repeatedly that the Indians mean her no harm and that she is safe living near them. Indeed, she lives with them when he leaves to bring the rest of their family to their new home in the wilderness. During this time she learns a great deal about their customs and gains an appreciation of their way of life. She comes to prefer her soft moccasins to the stiff leather shoes she used to wear before she lived with them.

The illustrations by Leonard Weisgard, in sepia tones, lend a rustic feeling to the story. They reminded me of Barbara Cooney's work.

Posted by tracy@womanonwire.com at 9:55 PM 2 comments: