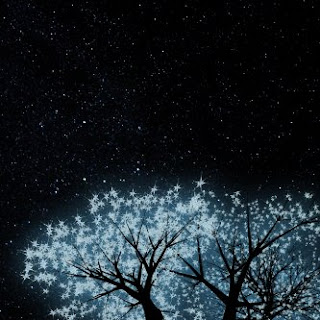 "When the square suddenly seemed to begin to glow in an enchanted way and look wonderful in spite of its sooty trees and railings, Sara knew something was going on in the sky; and when it was at all possible to leave the kitchen without being missed or called back, she invariably stole away and crept up the flights of stairs, and, climbing on the old table, got her head and body as far out of the window as possible. When she had accomplished this, she always drew a long breath and looked all round her. It used to seem as if she had all the sky and the world to herself."
--A Little Princess by Frances Hodgson Burnett

I have a place like this, too: a tiny half-bath window that faces the trees on the western edge of our yard. The two largest trees, an oak and a black walnut, are almost one hundred years old. Smaller black walnuts, locusts, and maples shade the lawn in the afternoon. The loveliest time comes as the sun is setting.

Spending all day with my children leaves me yearning for a quiet, solitary moment, especially at day's end. (If you can guess my Myers-Briggs type, you'll get a special mention in my next post.) Once the kids are in bed, I head to that window, open it and listen to the birds and feel the breeze that lifts the branches. As evening falls, fireflies begin winking in the grass and up in the trees. As a child, I was fascinated by Disneyland's artificial fireflies in the "bayou" on the Pirates of the Caribbean ride. Discovering that real fireflies are every bit as magical as the ones from that memory has proven to be a potent antidote to ennui. The fireflies that light the branches of the trees flicker next to stars. Their ephemeral display turns the dark giants into enchanted Christmas trees, months away from December: a midsummer night's dream.

"It's a Splendid one," said Sara, softly, to herself. "It makes me feel almost afraid--as if something strange was just going to happen. The Splendid ones always make me feel like that."
Posted by tracy@womanonwire.com at 10:54 AM 4 comments:

It's not just for resting anymore! Or is it? This afternoon, as soon as my son went down for his nap, I headed to the backyard where I had a blanket spread out under a tree. I read for a while, sipped some iced coffee and took a snooze. But, it wasn't always like this.

The first few months after my daughter was born, I collapsed into instant sleep whenever she did. Sleep deprivation trumped all other concerns. Later on, when she had a regular nap time, I wrestled with whether I should use that valuable time to accomplish my list of jobs or if it was more profitable to recharge my own batteries. The house was looking pretty grungy after months of neglect, so I opted to tackle that list. I worked feverishly for several hours and when I finally sighed into the recliner I would hear my baby girl waking up.
Sadly, it took many months before I gave up the power cleaning sessions. My initial response was to try harder. Optimize: clean faster! I thought, "If I don't do this now it'll never get done." My ideal home was tidy and inviting. Motherhood was messing with my sense of identity. I was a woman who ran a tight ship. What had happened? I had been warned that kids would change things, but I don't think I really believed it. Maybe other women couldn't handle it, but I was different.

As I became increasingly aware of how out-of-control I felt when the house was cluttered and messy I started to notice that I blew up more often when things were "out of place." It really irked me to see toys all over the floor and dirty dishes in the sink. My illusion of perfection was shattered. If the house was a mess, I felt awful. I had to clean it to feel good again. Figuring out what was going on was only half the solution. Once I knew what was happening, I still wasn't able to reason away the emotions that exploded when chaos reigned. Intellectually, I could understand that I was a control freak, but what could I do about it? How could I control it? When I considered my dilemma, I saw the image of a snake biting its tail, circling infinitely. In Celtic art, that kind of stuff is cool. For everyday life, it is not. I was the snake, biting my own tail, and it was making me miserable.

Ultimately, I credit AMA (advanced maternal age) as the cure for my manic nap-time cleaning sessions. If I'd been a mom in my twenties I would have powered through, leaving a faint burning smell in my wake. Thankfully, I was too tired to keep up such a rigorous schedule. My house has wavered between passably clean to somewhat grungy for several years now. I traded my ideal of perfection for a more homely reality. I still like my house to be clean, but if it's not, I can manage. I can enjoy the day. "Forget about cleaning -- for now."
Posted by tracy@womanonwire.com at 3:13 PM 1 comment: