What if and why not? 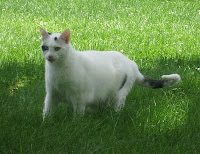 We adopted a kitten this weekend. My husband and I applied ourselves to constructing various barriers to keep the new kitten and our young adult cat Nacho away from each other. At some undetermined time in the future we hope they can get along in the same house. The woman from the adoption center optimistically offered that perhaps the new kitten will even "draw out" our rather anxious and neurotic cat.
When we brought Nacho home he was 8 months old and afraid of everything. He hid for days. Usually we couldn't find him, until he got bigger and had fewer options for hiding. He has warmed up to me to the point where he will sleep on my lap and enjoys seeing how much of the mattress he can hog from me at night. He considers my son a non-threat and will tolerate my daughter, though she smothered him with young-girl-cat-love when we first adopted him and he still distrusts her. But he will not let his guard down with my husband. We can't figure it out. Maybe it's my husband's height or the register of his voice? After almost two years, we've had to accept that he's unlikely to develop a sudden affection for someone whose footfall causes him to do an imitation of the scene at the beginning of The Matrix where Trinity dives through a window, hurtling through the cat door to the basement.
Last Friday, my daughter pleaded with me to go to Petco to "look at the kitties." We do this from time to time, with my disclaimer that we're not going to get another kitty. The kids were laughing and watching the kitties play while a volunteer cleaned out their cages and fed them. We chatted with her and she mentioned that one of the male kittens had the personality of a lap cat. None of our cats have ever been very affectionate. No problem for me, as I pride myself on being a bit of a cat-type person. My husband, however, wanted a cat that would sit with him on the couch and purr and just "hang out." There was something gentle and mellow about the little guy she showed us. I thought to myself, "Why not?"
The "nots" came flooding. I wasn't sure what my husband would say. What if we got this cat and it turned out to be like Nacho or worse? Was it too much money to spend and what about the vet bills? What if we turned into people with dozens of cats living in squalor? What if? What if?? I waited to tell him about the kitten until Saturday morning. I had instructed my daughter to let me talk with him first, thinking that I'd find just the right time...when he was in a good mood, etc. Maybe I would mention the visit and try to gauge his reaction. Apparently, being married to an easy-going man for over 9 years has not taught me much. I acted like a character from Oliver Twist asking for another bowl of gruel. When I told my husband about the kitten he said, "Let's go get him." Later, he teased me for my elaborate scheming. Like most of my worst-case scenarios, it was pretty silly.
Nevertheless, we have a sweet kitten who cuddles with my husband and loves to play with the kids. Nacho and I made up this afternoon: he slept on my lap while I sat in the glider and read. I've also been giving him lots of treats. I'm not above bribery.
Posted by tracy@womanonwire.com at 9:42 PM