The Clergyman's Wife: A Pride and Prejudice Novel by Molly Greeley
My rating: 5 of 5 stars

Head over to Austenprose for my review of Molly Greeley's debut novel, The Clergyman's Wife. The novel takes readers for a visit with Charlotte Collins, nee Lucas, and her highly eligible spouse.

Posted by tracy@womanonwire.com at 6:23 PM No comments: Links to this post

Mrs. Tim Christie by D.E. Stevenson
My rating: 5 of 5 stars

Based on the author's experience as the wife of an Army officer in early 20th century. She loaned her personal diary to a friend whose daughter was engaged to an officer in a Highland Regiment and was wondering what military life would be like. "There was nothing secret in my diary so I gave it to Mrs. Ford to read." When the family returned the diary to Stevenson, they told her that "we laughed until we cried" and suggested turning it into an "amusing book." After adding a few bits to "pep it up" she did, and the first of four Mrs. Tim books was published.

Like other Stevenson novels, this one shines with astute and humorous observations of daily lives that manage to be both hum-drum and chaotic. The author's love of nature is woven throughout the story, but especially shines in the last part of the story set in the Highlands. I also learned several new words:

ebullition: sudden, violent outburst
grass widow: a discarded mistress; woman with illegitimate child; a woman whose husband is away temporarily (in this case, Mrs. Tim); a woman divorced or separated
anent: concerning; about

I started marking passages of memorable quotes, but ended up with over twenty, so I'll share a couple to give the flavor of humor that I find appealing.


Personally, I am much more sorry for Herbert. (Mamie Carter is a person who sits still and smiles wistfully while everybody in the vicinity rushes around, wildly, doing her job.) Perhaps I am a trifle bitter about this, having assisted in the Carters' last move. (p. 15)

Am bitterly aware that Tim is one of those men who do not understand clothes or women, but reflect afterwards that perhaps this is just as well in some ways. Men who understand women being sometimes too understanding of women other than their wives. ( p. 57)

I reflect that neither of my companions is attending church with orthodox motives, but perhaps it is better to attend with unorthodox motives than not at all. (p. 237)

The things of Martha fall away from me, and a blessed feeling of idleness encompasses my soul. I have not got to remember anything--neither to order fish, nor to count the washing. I need not write an order for the grocer, nor hunt after Maggie to see if she has cleaned the silver and brushed the stairs. The condition of Cook's temper is of no consequence to me, there are no domestic jars to be smoothed over. No sudden appeals to my authority, requiring the wisdom of Solomon and the diplomacy of Richelieu, can disturb my peace. (p. 376)

Betty runs, and jumps, and springs into the air like a young goat. "The hills make me full of springiness," she says. "D'you think I shall find something nice to buy at the shop, Mummie? Guthrie says they have everything except what you want, but I don't know what I want so perhaps they'll have it. What do you think, Mummie?" p. 580


You cannot beat a D.E. Stevenson novel for comfort reading. A smattering of amateur book reviewers claim that some of her books are sub-par, but I haven't encountered a tedious one yet. Goodreads lists 54 distinct works, so if there are a few duds in there somewhere, I feel that Mrs. Tim can be forgiven.

View all my reviews
Posted by tracy@womanonwire.com at 4:49 PM No comments: Links to this post

A Victorian Lady's Guide to Fashion and Beauty

A Victorian Lady's Guide to Fashion and Beauty by Mimi Matthews
My rating: 5 of 5 stars

This book belongs on your bookshelf next to What Jane Austen Ate and Charles Dickens Knew: From Fox Hunting to Whist—the Facts of Daily Life in 19th-Century England to round out your knowledge of 19th-century life.

Ms. Matthews takes a chronological tour from 1840s through 1890s in the first part of the guide. Next comes fashion etiquette ("What to Wear and When to Wear It"). The final part covers Victorian beauty: haircare, skincare, and cosmetics and was my favorite as it was so much fun to read. A modern reader may not be able to relate to petticoats, crinolines, and mourning jewelry, but we must readily agree with Godey's Lady's Book, 1869: "Ladies of the present day, not content with the gifts of nature, often endeavor to improve and patch up the faults and imperfections of their complexions by artificial means." (p. 140) As Ms. Matthews points out, many Victorian ladies found cosmetics too powerful a temptation to resist, even if Queen Victoria did not approve of them.

Carefully researched, with ten pages of sources and notes, and generously illustrated, this book is the perfect guide for those interested in fashion, history, and culture.

Posted by tracy@womanonwire.com at 6:30 PM No comments: Links to this post

A Dangerous Collaboration by Deanna Raybourn
My rating: 4 of 5 stars

Veronica, Stoker, and Tiberius visit a castle on an island off the coast of Cornwall. A disappeared bride, a poison garden complete with rare butterflies, smuggling caves, hidden rooms, a healthy supply of suspects, and plenty of angst from the past figure in the latest Veronica Speedwell mystery. Deanna Raybourn does not disappoint. It's another winner.

We know they will solve the crime, but will Stoker and Veronica finally say those fateful three words to one another?

Posted by tracy@womanonwire.com at 5:47 PM No comments: Links to this post

Camp Austen: My Life as an Accidental Jane Austen Superfan by Ted Scheinman
My rating: 4 of 5 stars

4.5 stars. The author started out in full-snark mode attending a Jane Austen summer camp hosted by his university only to discover that the Janeites in attendance, while a bit silly, were touchingly human as well. While the gossiping glee never fully abated, why should it? "For what do we live, but to make sport for our neighbours, and laugh at them in our turn?" Impersonating Mr. Darcy and other Austen heroes for the purposes of ballroom dancing and theatrical performances, the author never fully renounced his outsider status. But he did learn a thing or two about himself, including the fact that Regency man-garb (constricting, tailored clothing, cutaway jackets, and tights) make you look like a rock star. They also instantly improve your posture!

As an admirer of Jane Austen, albeit one with a lapsed JASNA membership, I thought this was an accurate description of the kind of events that draw the faithful: equal parts gossip session, scholarly presentation, Regency Comic-Con, and excuse to drink tea and smother scones with clotted cream.

Posted by tracy@womanonwire.com at 9:41 PM No comments: Links to this post

The Summer Before the War

The Summer Before the War by Helen Simonson
My rating: 5 of 5 stars

From the idyllic fields of Sussex to the trenches in France, Helen Simonson's poignant and gently humorous novel focuses on the people in a small town whose lives are upended by the Great War.

It's billed somewhat as a Downtown Abbey-esque story (Julian Fellowes meets E.M. Forster old chap), but it was more focused on middle- and working-class concerns. The gentry still think it's all about them, but what else is new? This story is a real gem!

"For the first time, as her tea grew cold in the cup and her porridge gelled in its bowl, she saw what it meant to be of limited income. It was a noble concept for the church sermon or the pages of an improving novel, but a chilling prospect on a sunny Sussex morning."

View all my reviews
Posted by tracy@womanonwire.com at 1:49 PM No comments: Links to this post 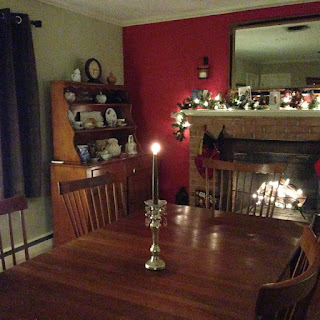 Some other versions say it brings "health to the home" so I'll take that too.

Happy New Year!
Posted by tracy@womanonwire.com at 6:30 PM No comments: Links to this post